In 1896, a driver from Faversham in Kent, one Walter Arnold, unwittingly, and probably unwillingly, entered the record books as the first driver of a motor vehicle to be stopped and fined by the police for exceeding speed limits.

Speed limits of 2mph had been established in urban areas some thirty years previously, and applied to both horse drawn and steam driven vehicles, with a rural limit of 4mph. History does not relate how Mr Arnold’s vehicle was chased and apprehended, nor how the claimed speed of 8mph was calibrated, but the resulting fine of 1 shilling stands witness in history.

As the age of the motor vehicle truly dawned, in 1930 speed limits for cars and motor cycles were scrapped, until 1934 when a limit of 30mph was introduced for all urban, or built up areas, generally defined as those with street lighting. That thirty mile an hour limit is still with us today as the most common urban speed.

There was no upper limit on most trunk roads, and in 1958 the first stretch of motorway was opened in Britain, the 8 miles of the Preston bypass which was to become part of the M6, this too had no restriction. 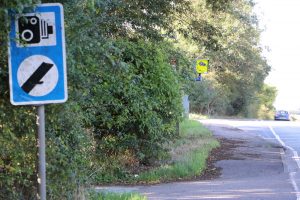 In 1965 the government, in an attempt to reduce the number of road traffic accidents, introduced a four month trial of a blanket upper speed limit on all roads of 70mph, the rest is living history.

The first hand held radar guns came into use to enforce speed limits in the ‘60’s, but as the numbers of vehicles on the roads of Britain grew and grew, so technology to enforce speeding restrictions grew also.

The 1990’s saw the introduction of fixed speed cameras, the most common to being the Gatso. They were all coloured grey and hard to spot, and created considerable hostility. In 2001 the government decreed that they were safety cameras as part of raising driver awareness, and that they should all be coloured “high-viz” yellow.

The Gatso uses radar technology to determine the speed of the vehicle as it approaches, and if triggered by that excessive speed, photographs the rear of the vehicle, focusing on the number plate. It photos’ from the rear because it uses a powerful flash, which, if directed ate the front of the vehicle would startle, or even momentarily blind the driver.

The picture is taken against a background of white lines painted on the road surface, allowing calibration to show secondary proof of speed.

The only “wiggle room” the Gatso allows is that person that the vehicle is registered to, could claim not to have been driving at the time, however, someone must have been!